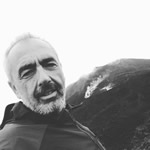 Research career of MP has been focused on the study of mechanisms of genesis, ascent, eruption and emplacement of basaltic magmas. These arguments have been studied on the basis of:

Beside the study of the active volcanism MP carried also volcanological and petrologic studies of volcanic detritus within drilled or gravity cores aimed at paleoenvironmental-paleoclimatic reconstructions.

As PhD student in Pisa (1985-88) MP started developing methods for quantitative textural studies (Crystal and Bubble Size Distribution) of volcanic rocks, that he applied to the study of crystallisation kinetics of products of recent eruptions of Etna. At the end of 1988, MP obtained a permanent position as scientist at CNR- Ist. Internat. of Volcanology (IIV) and was forced to leave the PhD school, since was incompatible, with the new position. At IIV MP joined the group responsible for the volcanological and petrological monitoring of Etna and Stromboli volcanoes and has been involved in all the volcanic crises that occurred from 1989 to 2004. In Catania MP also expanded and developed petrological laboratories, introducing innovative and modern methods of textural and petrological analyses, like X-ray mapping, digital imaging etc. In that years MP also contributed to geological map of Mt. Etna as responsible of petrographic investigations. Since 1995 MP initiated a collaboration with experimental petrologists with the aim of setting-up practical tools aimed at estimating chemico-physical parameters (T, P) useful for petrological monitoring activities. This produced an empirical geothermometers based on glass compositio. In this context after a short-term fellowship at Caltech-Pasadena MP also learned FTIR analytical methods that he applied to the study of recent products of Etna. This new approach to petrological monitoring and the large data collected improved enormously the knowledge of the magma dynamics at Etna and Stromboli. In particular at Stromboli, petrologic monitoring that MP performed, allowed the identification of the two type of magmas that feed the present day activity of this volcano. This new findings changed radically the knowledge of the plumbing system of the volcano giving rise to new and significant impulse of all the volcanological researches. Since 2000, when IIV joined the INGV, MP became responsible of the Volcanology and Petrology group and in this position during the 2001 Etna eruption he coordinated the whole group committed to volcanological monitoring. In the same time he started to develop methods for textural and compositional analysis of ash. Since 2001 relationships with experimentalists strengthened and expanded with new collaborations (Brown University- M. Rutherford) aimed at the study of phase equilibria in Etnean magmas. In 2004 MP moved back in Pisa to reinforce the new and growing branch of the INGV. In Pisa he further expanded the development of petrological tools employable for the monitoring of magma dynamics and eruptive processes within active volcanoes. MP also continued volcanological and petrological investigations on deposits of historical activity of Stromboli and Etna aimed at hazard assessment. Relationships with experimental labs continued initiating a fruitful collaboration with ISTO (M.Pichavant) and RUB (S.Chaktaborty) that produced important results in understanding magma dynamics at Stomboli et Etna. MP also created a limited experimental lab in Pisa, that was employed to study ash-recycling and alteration and low pressure crystallization of Etnean, Strombolian and Vesuvian magmas.
Beside the study of the active volcanism MP carried also volcanological and petrologic studies of volcanic detritus within drilled or marine gravity cores aimed at paleoenvironmental-paleoclimatic reconstructions.
In this context he participated to Cape Roberts Project – CRP3 (season 1999-2000) and ANDRILL – MIS Project (2006-7). In ANDRILL MP was Discipline Leader ( Petrology and Geochemistry) coordinating an international group of about 20 scientist.