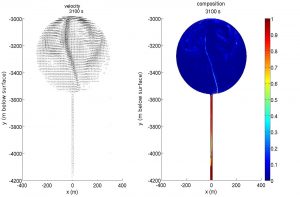 I am trying to understand the dynamics of mechanical and chemical mixing of magmas in shallow magmatic reservoirs. Evidences for processes of this kind are almost ubiquitous, as is the process of injection of primitive magma from depth to shallower regions where it can intercept already emplaced, degassed, more evolved residing magmas. The aim is to understand the time scales over which the process is effective, and under what circumstances this mechanism can trigger an eruptive event. 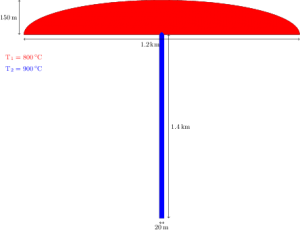 Mingling and mixing can take place in granitic magmas under certain set of conditions, or different batches can accumulate in different regions maintaining their individuality. The study is focussed on the shallow-level high-silica granites of the Larderello-Travale intrusive complex (Italy): zircon crystals from these rocks exhibit a large scatter in 206Pb/238U ages and significant variability in oxygen and hafnium isotope composition. while textural evidence and thermal simulations seem to  suggest that zircon from these rocks are antecrysts that crystallized at depth and were subsequently recycled and juxtaposed within the same rock volume during ascent and final emplacement. Our goal is to determine whether convective processes are able to originate such small-scale heterogeneities during emplacement, and under which conditions.
This work is being carried out within the EU MSCA project MIGRATE.

We are developing a new numerical framework to model magmatic and volcanic processes, based on the OpenFOAM library. This tool solves the multiphase, multi-component fluid dynamics of magmatic mixtures, and includes state-of-the-art constitutive equations for the relevant physical properties such as viscosity and density.
This work is being carried out within the HPC Training and Research for Earth Sciences program. 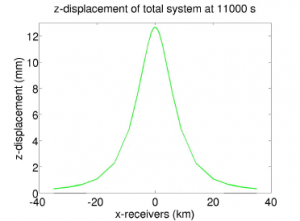 Using results from the numerical simulations of magma fluid dynamics, we produce synthetic ground deformation signals on the whole frequency spectrum and compare them to monitoring records. A lot of effort needs to be put into the cleaning and interpretation of the instrumental records, to obtain time and frequency analyses to compare with the synthetics. Being able to identify similarities among the two provides a mean to detect ongoing deep magmatic processes from routine monitoring data. 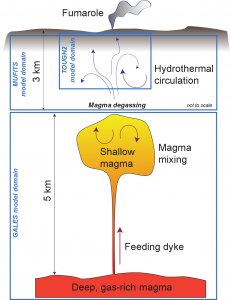 The coupling of magmatic and hydrothermal systems

The numerical simulations of magma chamber replenishment provide also details on the space-time evolution of gas volume fraction in the magmatic systems. We are now trying to use these results to infer the consequences of magmatic gas release on the hydrothermal system, specifically focusing on Campi Flegrei. This work is being carried out in collaboration with M. Todesco, at INGV Bologna.

We are developing a model for magma ascent in volcanic conduits that takes into account the non-Newtonian rheology due to the presence of gas bubbles in the magmatic mixtures. The results show that the more realistic rheology results in higher mass flwo rates for explosive basaltic eruptions.