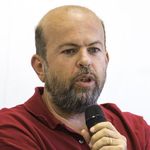 Experiences
Carlo Meletti soon after the degree thesis worked in Seismotectonics research group at the Pisa University, for more than 16 years. All the main input elements for probabilistic seismic hazard assessment (earthquake catalogues and macroseismic databases, geological maps and structural models, active faults and so on) were objects of his studies in the frame of the National Group for Defence against earthquake (Gruppo Nazionale per la Difesa dai Terremoti – GNDT) at CNR. Starting from 1988 he elaborated the geodatabase of GNDT.
At INGV he participated to the working group that released the seismic hazard map of Italy (MPS04; http://zonesismiche.mi.ingv.it), acknowledged as reference seismic hazard model by the Prime Minister Ordinance 3519/2006, and he coordinated the INGV-DPC project S1 (http://esse1.mi.ingv.it) that released the seismic hazard model on which is based the seismic input in the 2008 building code of Italy.
He participated to several international projects (NERIES, SHARE among others) mainly focused on seismic hazard and on historical catalogues and macroseismic databases.